I heard that there is a 2nd annual "Kitchen Reveal" where people post pictures on their blog of their kitchen being hosted by Lake Lure Cottage Kitchen. I'm nosey and love to see how other people live so I think this is pretty cool. Instead of just being a voyeur, I thought I should post some pics of my own little kitchen.

First, I feel like I need to show what the kitchen looked like before we moved in: 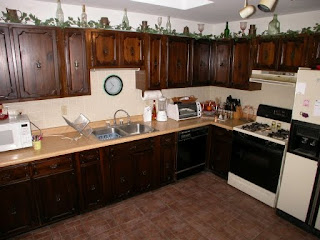 That was all the counter space I had. Just out of frame on the left side of the picture was a sliding glass door that took up the entire wall. Oh, and the dishwasher and oven were used by the previous owner as dish and cookware storage. Neither of them were in working order. 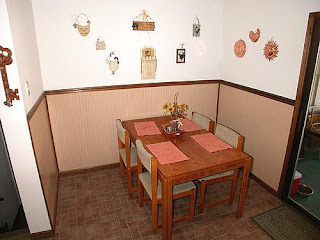 This picture is of what was supposed to be an eat in kitchen area. The picture was taken while standing at the sink. You can see a tiny bit of the sliding glass door at the bottom right of the picture.

We have one of the smallest houses in our neighborhood so making the kitchen into a bigger usable space was a bit of a challenge. I really wanted a pantry, but that meant losing the eat in kitchen. We solved that problem by changing the front room, which was supposed to be a family room, into a dining room, and the basement "den" into the family room. 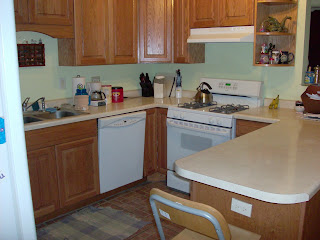 This picture is taken standing in roughly the same spot as the first before picture. We added a little pass through window where the fridge used to be to add a bit more light and so that it is easier to talk to someone in the dining room when you are in the kitchen. Less shouting is a good thing.

We also added the peninsula. This is my second favorite change to this kitchen. It makes cooking with Blockette so much easier. Aside from the peninsula giving me an actual food prep area, Blockette can sit at the end and help mix, eat a snack, draw, do school work, etc. while I'm cooking. 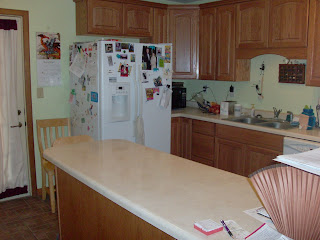 Here's another view from the entry into the kitchen. You can see that the wall where the sliding glass door used to be is where the fridge is now. 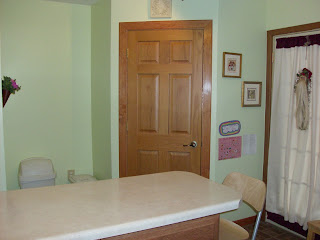 This area hardly seems big enough to have held an eat in kitchen. Without the pictures I don't think I would have believed it myself. The pantry is my favorite part of the kitchen. Here's why: 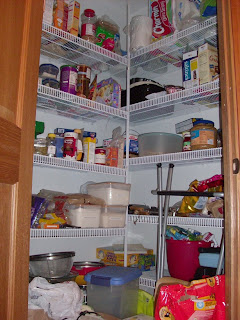 Where would I put all this stuff if I didn't have a pantry? The pantry allows me to save money on our grocery bill. I can buy the jumbo package of paper towels and 10 cans of peaches when they go on sale. I've found that little stuff like that really adds up!

So that's my kitchen in a nutshell. It's not the fanciest kitchen ever. There are a few things I would do differently if I had the chance to do it all over again. But the kitchen turned out quite nice considering our limited budget.

Posted by Mrsblocko at 7:50 AM