I loooooooove me some burgers. We eat them lots and lots in the summer, but almost never in the winter. Maybe it's the warmer weather, or the fact that I am jonesing for REAL warmer weather (you know the kind where you don't need a jacket), but the other day I had a big burger craving.

This recipe, entitled the best burger ever, from Little Miss Momma, was at the top of my "burgers to try list."  Let me tell you, there is the reason why it's called the best burger ever.  Cause it is.  Mrblocko begs to differ, but what does he know?  (He did say that they were pretty tasty, just not the best he's ever had.  So clearly he is wrong.  And I can say that cause it's my blog. So neener neener.)

There are two things that give this burger an edge over all other burgers: BBQ sauce and cheese.  The BBQ sauce not only adds this burst of tangy flavor, but it makes the burger super moist.  The cheese helps form this nice thin crust on the outside of the burger.  (Sometimes, when I'm making grilled cheese sandwiches, I'll intentionally drop some shredded cheese on the griddle just to get that baked crunchy cheese fix I love so much.)  If we had one of those fancy pans with lines on it, the burgers would have had those nice black lines, just like the ones you get from a burger cooked on the grill.

Not only is the burger recipe super rockin', but the recipe includes some pretty fantastic sauce.  Apparently, the sauce is based off of the one served at In and Out Burgers.  I've never been there, so I can't attest to it's authenticity, but it was pretty Awesome in it's own rights. 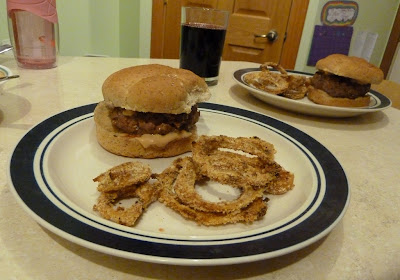 Usually, we grill onions with our burgers, but while burgers cooked on a skillet can be almost as awesome as those done up on a grill, pan cooked onions are not even in the same ball park as their grill cooked cousins.  Then I remembered this BBQ onion rings from recipe girl.com.

Not only did the onion rings pair nicely with the burger because of the BBQ flavors, but these onion rings were baked.  To me, that means the onion rings were doubly healthy. So we weren't consuming all that extra oil, AND I didn't have to get burned from the molten boiling oil.  Not getting burned is super duper healthy in my book.

Because I was uncertain as to how the onion rings were going to taste reheated, I only made up a half recipe using one onion.  The portion you see on the plate above is a quarter of the onion rings made from that half batch.

One word of caution when baking the onion rings: DON'T use a cookie sheet without a lip on it.  We did and neither of us realized that 3 onion rings had slipped off the sheet and onto the rack on the oven.  It wasn't until two days later when I went to move the rack to use the broiler that I noticed the three charcoal black onion rings.  How on earth did I (and Mrblocko) miss that!?

Both the onions and the burgers tasted just as good the next day reheated on the skillet.  So good in fact, that when I accidentally flipped the burger onto the floor instead of the plate, I didn't bat an eyelash.  Yup.  I totally 5 seconded that baby.

Combine beef, cheese, bbq sauce, and seasonings. Shape patties that are about 1 inch thick. Push a 1/2 inch indent into the center of the patty–this prevents the patty from becoming a dome.  Wait for the skillet to get super hot and then apply a very thin layer of butter to the pan. Place the patties on the pan, indent side up. Reduce heat to medium and cook 4-6 minutes, but make sure it doesn’t burn. Then flip the burger over and cook until done to your liking.
For the sauce: Combine all ingredients and whisk until well mixed. Taste and adjust ingredients to your liking.

1 cup barbecue sauce
2 large eggs, lightly beaten
4 Tablespoons all-purpose flour
3 cups panko bread crumbs (we used half regular bread crumbs and half panko)
2 large sweet onions, sliced into 1/2-inch rings
cooking spray
Preheat oven to 450 F. Place 2 sheets in oven and let those preheat too. In medium bowl, whisk BBQ, eggs and flour. Place bread crumbs in a separate bowl. Using tongs (or fingers) dip onion slice in  BBQ mix, shake excess off and dunk on all sides into bread crumbs. Lay on a cool baking sheet. Repeat until all onion slices have been dunked. Remove hot baking sheets from oven and spray lightly with cooking spray. Move coated onions to hot baking sheets. Spray coated onions lightly with cooking spray. Bake 6 min, or until golden, use tongs to turn each onion ring over. Spray other side of onions with cooking spray and bake for an additional 5-7 min. Watch closely to make sure they crumbs are not browning too quickly or burning. Remove from oven and serve immediately.
Posted by Mrsblocko at 7:22 AM