These sweet little pies are bigger than the bottle cap magnets but smaller than the half pint pies in a jar. If you were a Pushing Daisies fan, you might classify these little guys as mini cup pies since they were baked in a mini cupcake/muffin tin. 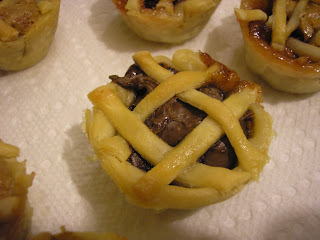 I found this recipe for Peanut butter and jelly baby lattice pies over at Picky Palate. I was searching for something in the freezer last week and came across half a box of pre made pie crust. I have no idea what the other half of the pie crust was used for. Maybe it's best if I don't think about how old it was. I defrosted it, and the dough looked fine. There was no sign of freezer burn or anything nasty like that.

My pies didn't turn out as nice looking as the ones from Picky Palate. I could blame the crust, but it was more likely a combination of several issues. First, I don't think I sprayed the pan very well. Second, I was afraid of the dough sticking to the counter. Usually I don't flour the counter well enough. This time I went the other direction. The dough was a little tougher and therefore more difficult to get the lattice pieces to behave. Third, I cut several of the lattice strips at 1/8 inch thickness, per the directions, and the lattice strips on those pies cracked when I removed them from the muffin tin. The strips I cut at 1/4 inch width (like the one in the photo above) fared much better. Fourth, I don't think the pies got cooked quite long enough. I took them out after 30 minutes because I was afraid the tops would burn. The bottoms were the teeniest bit under cooked. Perhaps if the crust was a bit crisper it would have released better from the pan. Last of all, it took me so long to assemble the fussy little pies that I think the dough got soft in the pan and it soaked up some of the poorly sprayed on cooking spray.

While I was nibbling on one of these little treats I had a hand smack to the forehead moment. Why on earth didn't I make some with the flavored peanut butters I had in the pantry? Duh. I completely forgot about them! I also could have made some with the apple butter my husband keeps forgetting we have in the fridge. I'll have to give those other things a try when I'm in the mood to be fussy in the kitchen again. Maybe I'll even work up the courage to make a crust from scratch again. Homemade crust is so much more tasty than the pre packaged stuff. It would make this fussy dessert more fussy though...I'll have to give that some more thought.

Preheat oven to 350 F. Unroll pie crust onto a lightly floured surface. Use a 2 1/2" round cutter to cut out circles in dough. Lightly press dough rounds into greased mini muffin tin. Roll remaining scraps of dough to an even thickness then use a sharp knife to cut thin 1/8" strips to create the lattice topping. Set aside.

Mix peanut butter and sugar until combined. With a small cookie scoop or teaspoon, drop a heaping t into each pie crust. Do the same with jam. Using pie strips, form lattice top. Cut excess dough from edges and brush tops lightly with egg wash, sprinkle with sugar crystals and bake 25-30 min til nice and golden brown.

Remove and with tip of a knife, loosen edges where jam has oozed out. Carefully remove from pan after 5 min with help of knife and let cool. Dust with powdered sugar and serve with milk!
Posted by Mrsblocko at 7:21 AM