I am not the number one fan of Indian food, so I have no idea why Simple Comfort Food's recipe for Indian Chicken caught my eye. The marinade is yogurt based, with lots of delicious spices to boot. Mrblocko was upset because the marinade was so thick it stuck to the grill. I have no idea what he was talking about. As you can see from the picture below, only a small part of the marinade came off of the chicken. 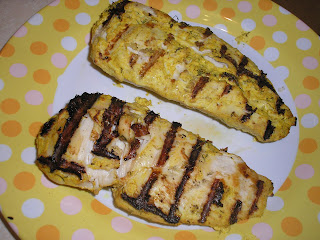 Since I am the one who does the shopping and I really don't like dark meat, I used 4 large chicken breasts in place of the 6-8 chicken thighs the recipe called for. The recipe also calls for half of a thick sliced red onion. I used the whole hugemongous red onion.

The red onion really makes the dish. We really should have grilled up two large red onions. The chicken breasts were so large that we only ate two of them. We ate that whole grilled onion up though. If I had cooked up two red onions there would have been some to eat with the leftovers.

Oh, there was one more change I made to this recipe. I used Jasmine rice instead of Basmati. Jasmine is my favorite rice I rarely buy anything else. It's just so nutty and stinks up the house real perty-like.
What did Blockette think of this global dish? Well, Blockette was having a severe attitude problem at dinner which resulted in her going to bed without finishing her dinner. (Before you go flaming me about how I'm a horrible parent, sending my kid to bed without dinner...know that we ate dinner extremely late that night and it was almost her bed time anyway.)

We have a new rule in our house that if Blockette gets put to bed on account of her behavior she has to eat the rest of her dinner for breakfast. We started this after we realized she was intentionally misbehaving in order to get out of eating. I had wondered if this was the case or if she was just overtired. Apparently, she was just overtired because she ate her Indian Chicken and rice for breakfast with no problems at all and even asked if I could make it again. Yay!

Begin by mixing everything but the red onion and olive oil in a bowl. Add this mixture to a large ziplock bag, placing your chicken thighs in the bag. Massage the marinade into the chicken (from the outside of the bag), seal, and place inside of the refrigerator for at least 2 hours, however the longer the better.

Get your grill started, and get it heated to a medium heat. As the grill is heating, remove the bag from the refrigerator and let the thighs take some of the chill off. To a small bowl, add the sliced onions, and pour the olive oil on top of the onions, gently coating them. Place your thighs on the grill. Don’t worry if cilantro gets on them because that is what you want. Grill your chicken thighs for about seven minutes on each side. Flip, and repeat for the other seven minutes. Add the onion slices to the grill, and cook for a few minutes, just until they become nice and tender.
Posted by Mrsblocko at 9:32 AM