A few weeks ago I was feeling under the weather.  Nothing sounded good to eat, not even toast or soup.  I was sitting at the computer, screwing around in hopes that I could just pass on the whole lunch thing. Then I came across this recipe for Okayu over at FOODjimoto.  I knew instantly that I HAD to get my butt in the kitchen and make it for lunch.

Back when I was in college, many many moons ago, I took a quarter off of school to visit some friends in Japan.  It was a horribly failed trip as I caught a virus on the plane and had to return home after only having stayed for a week.  My "friend's" (I use the term "friend" loosely here, as apparently me getting sick really put a cramp in her style)  mom made me some Okayu in hopes that it would make me feel better.  It was one of the few things I could actually eat.

I had no idea how to make it or even what it was called.  The mom just plunked the bowl of gruel in front of me and politely encouraged me to eat it.  I didn't realize what it was until I saw the picture of it on the FOODjimoto blog. 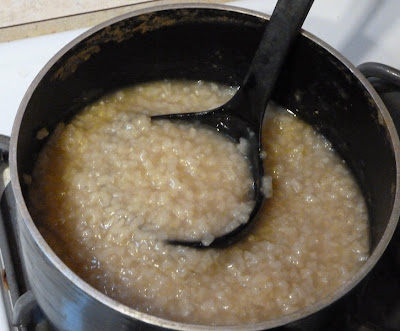 This dish was exactly what I needed back then, and last week when I was under the weather.  I was feeling better the day after I made this, so I added my Okayu leftovers to some veggie soup.  It made for a really thick yummy soup!

If you're feeling under the weather, but not quite up for the usual chicken noodle soup pick me up, here's what you need to make Japanese rice porridge!
1/2c short or medium grain rice
4 c water

Rinse the rice in a colander.  Put the water and rice into a pot and let it come to a boil.  Simmer covered on the lowest setting for 30 min.  Keep the lid slightly ajar so the pot doesn't boil over.  (I forgot this part and made a mess of my stove. Don't be me!)  Stir occasionally so the rice doesn't burn. Add salt or whatever strikes your fancy.  ie pickled plum, eggs, leftover meat, veggies, dashi, etc.  I didn't have any of those things, so I added 2 cubes of chicken bullion to the water as the rice cooked. It was a bit on the salty side for me, so I think next time, I'll try just one bullion cube.
Posted by Mrsblocko at 9:36 AM