O.M.G. Becky, look at her Bundt

How did you celebrate National Bundt day???? Did you even know Nov 15 was National Bundt day? I would not have been thusly informed, were it not for the Food Librarian's I Like Big Bundts: 30 Days of Bundt Cakes. Really, how complete was my life not knowing this...not very I'd say.

Now that the Food Librarian's 30 Days of Bundt Cakes is over, I must admit I'm a bit sad. I really looked forward to a daily bundt recipe. I think she is enough of a bundt freak that she'll be making more in the not so distant future. At least I hope she didn't burn herself out completely. That would be a travesty. Maybe if she becomes the anti bundt queen she'll send me some of her swanky bundt pans. I totally have bundt pan envy. 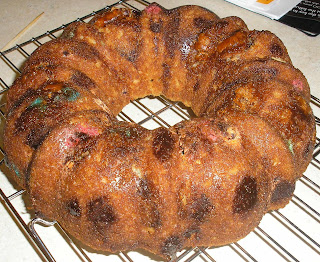 I mentioned a while ago I had chopped up a cup and a half of Halloween candy with the intention of using it in a bundt cake. Blockette has been eyeballing that container of candy bits every time she is in the kitchen. Whenever I would start moving and clanking around in the kitchen, she would ask if I was going to make the candy cake. I figured it was time to end Blockette's suspense. Besides, I couldn't let a mega holiday like National Bundt Day go by without paying due homage.

The recipe I used was Vanilla Bundt Cake with Halloween Candy Bits from Natalie's Killer Cuisine. The cake itself was a bit dry and on the dense side. This may have been because the batter was not mixed properly. Blockette has a creaping nose crud cold and I had to keep putting the hand mixer down to blow her nose. (Don't worry. I washed my hands at least once during the baking process. Mmmm mucus cake!)

There is also a possibility that I baked the cake too long and that was why the cake wasn't as moist as I would have liked. The recipe suggested baking between 30-50 minutes. I baked this bundt for 45 minutes. I checked the cake at 30 minutes and it was quite jiggly in the middle. I set the timer for another 15 minutes. I bet the cake would have been better if I took it out at 40 minutes.

I don't know that I"ll try this recipe again. I came across 2 other candy bar bundt recipes that I'll give a test drive once we are overloaded with candy again. I'll post links to them later in the week, along with several other recipes that call for leftover Halloween candy.

I sprayed the bejeezus out of the pan with Pam with flour. When I thought there was enough I gave it another coat. I also sprayed the pan immediately before pouring in the batter. There was only minor stickage in 3 spots when I unmolded the cake. I was able to stick them back on cake. The top of the cake is so mottled looking from all the different candies that the minor patchwork is not noticeable.

Also, if you take a good look at the picture above, the cake is sitting on a cooling rack. For some reason I turned the cake onto a cooling rack instead of a plate. That was not a brilliant move. I very carefully cut a few slices from the cake while it was on the rack and then moved it to a plate. I tried to move it to a plate before I cut into it, but the darn thing started to crack. Hopefully, I'll remember not to do that with the next bundt I make.

preheat oven to 350 degrees Cream the butter and sugar until fluffy, about 3 minutes. Add the egg/egg whites and mix until fully combined. In a separate bowl combine the flour, baking power and salt. Set aside. Add the milk and vanilla extract to the egg moisture, mix until fully combined. The mixture may look curdled, don’t worry it’s not. Add your dry ingredients and mix until just fully combined. Chop up your candy ahead of time and add the candy bits to the cake batter and fold until combined. Pour in a prepared bundt pan and bake 40 minutes. Top with powdered sugar.
Posted by Mrsblocko at 8:16 AM