Why do I always want to put a "T" in Nacho? It is really annoying because I know it is not spelled that way. My fingers just add an extra letter while I'm typing. Clearly my brain is just wired wrong.

Anyhow, T or no T, this beefy nacho soup a la Real Mom Kitchen was really delicious. I made a few slight changes to the recipe to use what I had on hand. Instead of Campbell's Nacho cheese condensed soup, I used southwestern pepperjack cheese soup from Campbell's. This soup had been sitting in the pantry forever. I had no idea why I bought it or what to do with it. It seemed like the perfect substitution.

I also used a mix of Swiss, smoked Gruyere, pepperjack and Colby jack cheeses because my cheddar was fuzzy and smelled like feet. Yes, some cheese is supposed to smell like feet, cheddar...not so much. Since canned soup is so salty already, I used a Tablespoon of salt free homemade taco seasoning. I also added corn, because I had some in the freezer and I thought it would be yummy. I just eyeballed it. I used at least 1 cup but not more than 2. Had I been making this soup for just Mrblocko and myself, I would have added black beans. I was not up for a battle with Blockette though, so I used good judgement and left them out.

We haven't been eating a lot of processed convenience foods lately. I've been trying to make more stuff from scratch when I can. Because of this, I thought there was a very slight aftertaste from the canned soup. Mrblocko and Blockette both thought the soup tasted just fine, and didn't notice any aftertaste.

I made this soup on the coldest day of the year. I know this because Blockette is wearing a sweatshirt. The girl never wears a sweatshirt. I liked the slight spicy heat this soup had. It was extra nice since it was so terribly cold that day. If you want more heat in your soup, just use the Hot version of Rotel.

A final note: You MUST crumble tortilla chips on top of your soup before eating... 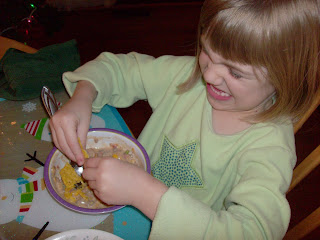 And when you crush them...you MUST make this face. Crushing tortilla chips requires a scrunchy face. Oh, and a monster growl.