I had never had blackeye peas before. I think I lumped them into the same category as peas or other white beans. Until recently, I've really cared for neither. Stephanie over at a Year of Slow Cooking came up with a recipe for black eyed pea crock pot soup that sounded so good I felt compelled to try it. Stephanie had tried black eyed peas previously and found them to be disgusting. So when she said this soup was good, I believed her. 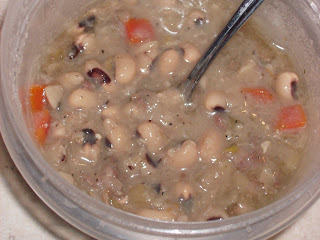 The first time I made this soup I used ham stock in place of chicken stock, and cooked crumbled bulk breakfast sausage. The second time I made this recipe, I used the last of my Ham Stock and crumbled bulk Italian sausage. The recipe says to use "hot" (as in the spice, not the temperature) sausage, which I can't stand. I figured the Italian would give a bit more spice, without going to an extreme I would find unappealing. The Italian sausage was tastier, in my opinion, but Mrblocko said he couldn't tell the difference.

Technically, you are supposed to use sausage links/bratts. The next time I make this dish, I will make sure I have them on hand. The final step of this recipe is to scoop out some of the beans and puree them in a blender. It was hard to keep the tiny bits of meat out of the beans that were scooped out for puree. When I do use the links, I will slice them in coins, quarter them and brown them first before adding them to the crockpot. I think the caramelized bits on the sausage would add lots of tasty goodness to this soup.

After making this dish for the first time, Mrblocko and I also agreed that more than a cup of the beans should be pureed in the blender. When I made this for New Year's Day dinner I pureed 2 cups of beans. This did make the soup thicker and creamier, just not quite as creamy as we would have liked it to be. The next time I make this soup, I'm going to blend up 3 cups.

The verdict was that this was tasty! Even Blockette gave the thumbs up! (beans and all!) I'm so glad I finally got around to giving black eyed beans a try. They are nothing like the other white beans like Northern, navy or Cannellini, they are so much better. They have such a mild un bean like flavor. That's probably why Blockette and I liked the soup so much.

Finally, don't skip the hot sauce on this recipe. You know that when I, the hater of hot sauce, says not to skip the hot sauce, it is an essential ingredient. I ate this for two separate meals before I added hot sauce. I kept thinking...this is missing something. So I gave the hot sauce a whirl. It adds this little bit of heat that somehow compliments the rest of the flavors within the soup. Of course we couldn't convince Blockette to try some with hot sauce. She was eating the soup without complaint, and that was enough for me!

Soak your beans overnight. Drain and pick out the undesirables (broken, discolored beans) in the morning. Use a 5 to 6 quart crockpot. This will serve about 8 people. Dice the veggies, and dump them into your crockpot with the pre-soaked beans. Add sliced sausage. Pour in broth, and stir in Italian seasoning, salt, and pepper. Cover and cook on low for 8 hours, or on high for about 6. Before serving, use a stick blender to smash up about 1 cup of beans. If you don't have a stick blender, scoop out 1 cup of beans, blend them in a traditional blender, and add back to the soup. Don't blend too much---just enough to get the broth thicker and creamy-looking.
Posted by Mrsblocko at 7:21 AM