It's been a while since we talked pumpkin. Did you think my freaky pumpkin fascination had diminished with the passing of fall? You did?  Well you were wrong! Get ready for another week of pumpkin goodies!

Can you even handle it?  No?  Well...um. Sorry bout that!  Pumpkin is awesome.  Embrace it.  You'll feel better.

Anyhow...I made these pumpkin pancakes from Texanerin Baking. 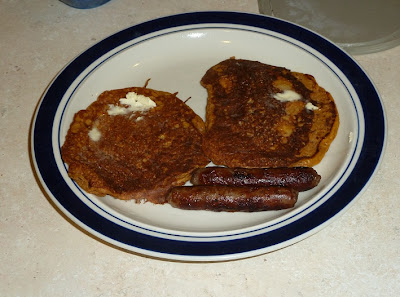 OK.  So when I say I made these pumpkin pancakes, what that means is I chose the recipe, gathered all the ingredients and smooshed them together.

Mrblocko did the ACTUAL cooking and flipping of the pancakes.

Because, apparently, I CANNOT cook pancakes.

I'm ok with that cause Mrblocko can.

I will assure you that while the pancakes are dark, they are most definately NOT burnt.  (Although, if I cooked them they would be little flat disks of coal.)  The pumpkin is obviously going to make them darker, but the sugars in the pumpkin caramelize and add a darker brown to the finished product.

Overall, I'd say these pancakes are darn healthy.  Can you believe there is only 2 T of maple sugar in the whole recipe?  And no other sugars either?  I had to double check that it wasn't a misprint.  But no.  Super duper low on sugar.  I loved that because I could actually have them with syrup.  Usually pancakes and waffles have so much sugar that I get sick if I have more than a tiny bit of syrup.  Not so with these babies!

My family balked at that too.
You can't taste it at all. And since it gets all whirled up in a blender/food processor, you can't see it either.

I think I may have over mixed the batter on these pancakes.  They were so delicate that after they had syrup on them, they would fall apart as they were being stabbed with a fork. We found that the solution to this problem was to have the syrup in a small bowl on the side for dipping.  This also resulted in us using far less syrup than if we'd poured the syrup on top of the pancakes.  See!  This recipe is an all around win win.

Pour oats in the food processor and give it a few pulses. You want them to be a little finer is all. Then add all the other ingredients and mix until thoroughly combined. There definitely shouldn't be any lumps. Because we're using cottage cheese here, I don't recommend making these without the help of a food processor or a good blender.

Cook in a medium pan over medium heat. For mrblocko, it took two minutes before I flipped them, and then another minute on the next side.

Notes : You can use 3 1/2 teaspoons of pumpkin pie spice in place of the separate spices. (I did this.)
Posted by Mrsblocko at 8:30 AM