I explained to her that not only were they expensive for the amount of food you got, they weren't all that tasty.

She wasn't buying any of that.

I also tried to tell her that the pizza Lunchables probably wouldn't be a good idea because they are rather messy to eat. Oh, but didn't I know that Lunchables were magic?  They have the ability to transform the messiest eater into someone suitable for tea with the Queen.

I had no idea of those amazing properties?  Did you?

So I placated her by making a bargain. I found this recipe for diy pizza lunchables over at Mommys Kitchen.  I told her we'd test out how messy they would be while we were in the comfort of our own home, and if all went well, she could take some to school in the fall.

I let her assemble some mini pizzas just like she would if she was going to eat them in the school cafeteria. 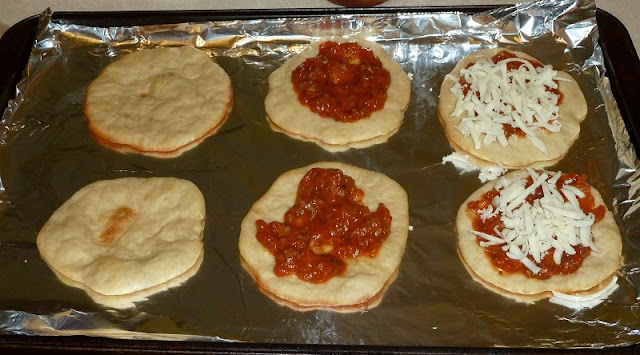 Not only were they messy, the cheese was NOT melted!  Maybe those Pizza  Lunchables weren't so stupendous after all.

However, since we were at home, I popped those little guys under the broiler for a few minutes. 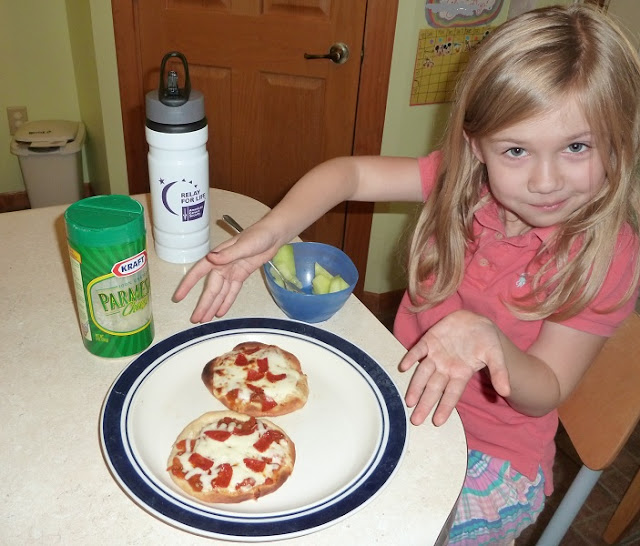 Now there was the awesome amazing life changing lunch Blockette was hoping for.  She was a bit bummed that she can't have them like this at school. (What do you mean no one will heat them up in the oven for me?)  I think she was satisfied to have them as a special at home lunch.

Prepare pizza dough according to recipe. Separate dough into 18-20 golf ball size pizza balls. Set aside and let the dough rest for about 10 min. Preheat oven to 400 F. On a floured surface roll out each pizza dough ball into a 5"circle.

Place place each pizza round on a pizza pan or baking stone. Bake for 8-10 min or until the bottoms are very lightly brown. Remove from oven and let cool before removing from pizza pan. When completely cool place in a gallon size freezer bag and store in the freezer until ready to use.

To assemble Lunchables for transport to school:
Add two pizza crusts to a plastic container with a lid. Add about 2-3 tablespoons pizza sauce to a snack size zip lock bag and seal. Add mozzarella, cheddar cheese and pepperoni if using to a second bag and seal (about 1/2 c cheese). Add everything to the plastic sandwich container and place a plastic spoon inside to spread the pizza sauce. Close or snap shut and add to your child's lunch box.

To make at home:
Defrost 2 - 4 crusts in the microwave on high for 20 seconds.  place on rimmed cookie sheet.  Top with sauce, cheese and pepperoni.  Broil for about 5 min until cheese melts.

(For regular sized pizza) Spray pizza pan with non stick baking spray or brush with olive oil. You can also use a pizza stone. Press dough into pan. Pre bake crust 10 min. Remove from oven and spread with sauce and toppings. Bake until crust is golden browned and cheese melted, 10-15 min.
Posted by Mrsblocko at 10:47 AM