So far my Christmas Cookie Disasters haven't been so disastrous.

I wouldn't say these last too cookies weren't a disaster, they were just massive disappointments.

Let's start out with the Caramel Apple Fudge from Very Culinary. 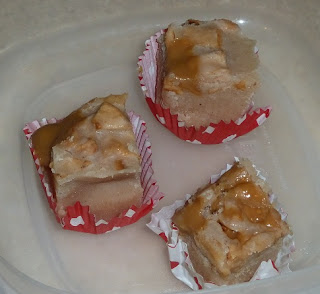 Why do I keep thinking I can make fudge?

Isn't that the definition of insanity?  Doing the same thing over and over and expecting different results?

I must have fudge insanity because I make it and every time it turns out gritty and grainy.  The fudge also took 24 hours to set up in the fridge.  I'm pretty sure it's not supposed to take that long.

I wish I could figure out what I was doing wrong while preparing fudge. I followed the directions to the letter.  Maybe fudge and baklava are my kryptonite in the kitchen.

My mom took one bite of this fudge and I'm pretty sure she spit it out.  She said it tasted like straight sugar.  She couldn't taste the caramel or the apple pieces.

Then again, I made a box of cookies for Blockette's teacher and the next day Blockette came home with a note from her teacher saying her husband thought the apple bites were "heavenly."

So I'd say the reviews on this fudge were definitely mixed!

This brings us to the Pumpkin Pecan Polvorones/Russian tea cakes/Mexican wedding cakes from Cookie and Kate.  I've been on such a massive pumpkin crush that I thought, "I'm sure if I combine my favorite cookie with pumpkin it will turn out amazing."

The thing was that the cookies themselves were not terrible.  They were a very mildly sweet little tidbit, great for a mid morning snack.

So what was the problem? 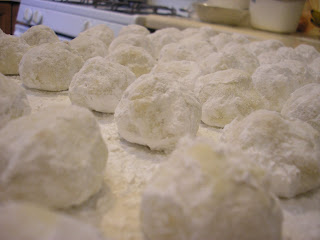 So when you bite into them...you think you are going to taste a Russian Tea Cake.

And these cookies?  They are soooooo NOT a Russian tea cake.

I was so thrown by their appearance that I wound up tossing most of them.  No one wanted to eat them and they went stale.  Boooo hiss.

It's too bad that these cookies are camouflaged as Mexican Wedding Cakes.  If they looked like something else, I think people would have eaten them instead of complaining about how they were NOT Polvorones.

In fact, the raw dough tasted better than the cooked version.  As the dough is egg free, I think I might try making these and freezing them uncooked for a low sugar snack.  Uncooked, they just look like raw cookie dough.

I got so much flack from my family over these cookies that next year, I'm going to tell them all that I made this same pumpkin version, but make the classic version instead. That way I won't have to share!  How sneaky is that?!

Line an 8×8 baking dish with parchment paper (13×9 inch pan if you like your fudge thinner.) Set aside. In a large saucepan combine the first four ingredients, bring to a rolling boil and stir continuously for 4 minutes (because the mixture burns easily.) Remove from heat. Add white chocolate, dried apple, vanilla, and spices; blend well, stirring for several more minutes until chocolate is almost completely dissolved. Pour into baking dish. Heat Dulche de Leche in the microwave for 15-20 seconds to loosen. Drizzle or drop dollops around in the baking dish and swirl through with a dull knife for a marbled effect. Refrigerate for at least 3 hours (or overnight), until hardened. Remove parchment paper from pan and place on cutting board. Cut into squares. Fudge can be stored in a covered container in the refrigerator for one week. Makes 16 big squares, or up to 64 little ones

Posted by Mrsblocko at 7:00 AM