No...not together!! That would be really icky. Peas and anything coffee are two things I don't normally say "mmmm!" too, but there is always an exception to every rule.

I've been feeling very daring in the kitchen as of late. I told Mrblocko that I was making Crunchy Pea Salad as a side dish to burgers for dinner and he indicated that he thought it sounded unpleasant. I went ahead and made it anyhow. I loved it. The salt from the bacon and pecans went great with the uncooked peas. Plus, everything was crunchy. I think that is the big thing I don't like about peas, they turn mushy and pasty when cooked. Mrblocko said he thought they would taste better with some grape tomatoes. I just happened to have some and he liked it enough to tolerate the salad as leftovers for lunch. Blockette said she didn't like it, but we made her eat a small portion anyhow. After the 3rd bite she said, "Maybe I do like this after all, but I don't think it tastes good." (I think she was in an especially contrary mood.) Next time, I'll add some chopped water chestnuts for even more crunchy goodness. I couldn't get a good picture, so if you want to see what the salad looks like there is a great pic in the link above.

Now onto dessert! I bought this instant espresso specifically to make this shortbread. I had a hard time tracking it down. A few months ago I was near a Whole Foods and thought I'd check in there. Lo and behold, there it was. 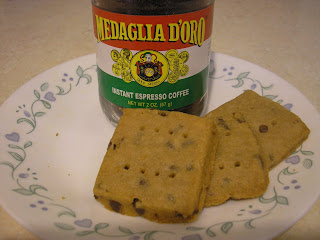 Why go to so much trouble to find an ingredient for something I was unsure I'd like? First, this recipe got such rave reviews I thought it would be worth the risk. Second, there are quite a few people in my life that are coffee freaks. I thought they would really go ga-ga for this cookie. Third, I've found a few other dessert recipes that call for instant espresso powder. If the cookies bombed, I'd have a great excuse to experiment with something else.

The Espresso Chocolate shortbread cookies are originally found in a book called Baking:From My Home to Yours, but I found them on a great blog called Smitten Kitchen. The book is by Dorie Greenspan who apparently is some sort of baking guru. There are blogs where all people do is make recipes from her books. Food bloggers can't seem to say enough good things about her creations. Guess you'll have to add me to the list. While this is the first "Dorie" creation I've baked, it won't be the last.

I had always heard how fussy shortbread was. I don't know how true that is as I've never made shortbread before. This recipe was super easy! I loved rolling it out inside the gallon ziploc bag. I usually have trouble with roll out cookies. The dough always sticks to whatever surface I roll it out on. Inside the bag it didn't matter if it stuck. Once the dough chilled, I cut away the bag. I think the heavens parted and a ray of celestial light filled my kitchen. (or that could have just been the sun coming out from behind a cloud through the kitchen sky light. We'll never know.)
You are supposed to measure out the dough into 1.5" squares after it has chilled. I thought that might be tricky until I remembered my clear plastic quilting ruler. I wrapped that sucker in plastic wrap so I wouldn't have to worry about cleaning it or if the ruler was food grade plastic. I even used my pizza cutter like a rotery wheel. Zip, zip, zip!

I don't know why I like these cookies. I don't like coffee at all. Coffee flavored things usually gross me out. Maybe the coffee taste is too mild for me to care? Whatever it is, it's hard for me to stop at one. Naturally, Blockette took the eentsiest nibble and handed it back to me. I would have been shocked if she had liked it. Mrblocko said that he wouldn't ask for me to bake them again. HUH? I was stumped at that reaction. I thought he would have flipped over them at least half as much as I did. After getting over my shock, we talked about it and he said that he was expecting them to be sweet like a regular cookie. (They are shortbread after all. They're not supposed to be super sweet.) He did ask if he could take some to work to drink with his coffee. I guess a mediocre cookie is better than no cookie at all.
I think the biggest test will be over the 4Th. My uncle is a coffee nut/freak/snob/loonie toon AND a cookie tester of the nth degree. If he doesn't like them, I guess I'll have to eat them all myself. Hopefully they won't magically disappear before he gets a chance to evaluate them.

Cook bacon in a 400F oven til crisp, 15 min. Crumble and set aside. Combine mayonnaise, vinegar, sugar, pepper, and Worcestershire sauce in a salad bowl. Add peas, bacon, nuts and onion, toss thoroughly and chill before serving. Make at least an hour in advance so the flavors blend.

Dissolve espresso in the boiling water, and set aside to cool to tepid. Working with a stand mixer, preferably fitted with a paddle attachment, or with a hand mixer in a large bowl, beat butter and confectioners’ sugar on medium for 3 min, til mix very smooth. Beat in vanilla and espresso, then reduce speed to low and add flour, mixing only until it disappears into dough. Don’t work the dough much once the flour is incorporated. Fold in chopped chocolate with a sturdy rubber spatula.

Using spatula, transfer soft, sticky dough to a gallon-size zipper-lock plastic bag. Put the bag on a flat surface, leaving the top open, and roll the dough into a 9 x 10 1/2" rectangle that’s 1/4" thick. As you roll, turn the bag occasionally and lift the plastic from the dough so it doesn’t cause creases. When you get the right size and thickness, seal the bag, pressing out as much air as possible, and refrigerate the dough for at least 2 hours, or for up to 2 days.

Position the racks to divide the oven into thirds and preheat the oven to 325F. Line two baking sheets with parchment or silicone mats.

Put the plastic bag on a cutting board and slit it open. Turn the firm dough out onto the board (discard the bag) and, using a ruler as a guide and a sharp knife, cut the dough into 1 1/2-inch squares. Transfer the squares to the baking sheets and carefully prick each one twice with a fork, gently pushing the tines through the cookies until they hit the sheet.

Bake 18-20 min, rotating sheets from top to bottom and front to back at the midway point. The shortbreads will be very pale–they shouldn’t take on much color. Transfer the cookies to a rack. If you’d like, dust the cookies with confectioners’ sugar while they are still hot. Cool the cookies to room temperature before serving.
Posted by Mrsblocko at 9:02 AM