Here is the lovely Bratwurst and Potato Soup from Eatin on the Cheap. 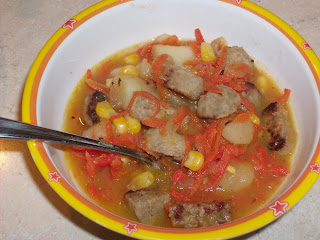 I made this one night after Blockette's Art class. I knew we wouldn't be getting home until almost 5pm so I did all the chopping and shredding earlier in the day. That way all I had to do was let the soup cook, bubble and simmer away. You can even peel and cut the potatoes up in advance. Just store them in the fridge in a container large enough so the potatoes can be completely covered in water. This way they won't turn any funky colors.

Because the brats I had were Jennie-O Turkey Brats I changed the recipe up a bit. The weight on the package is 19.5 oz, and the original recipe calls for only 12 oz. I mostly just increased all the ingredients so the dish had a more reasonable meat to veggie ratio. Mrblocko said that this was now his new favorite soup. We all liked it, but I wouldn't say it was any better than any other soup I've made.

Boil the sausages in about an inch of water until you think they are cooked, or at least cooked enough to slice. I hate the skins on turkey brats so I peel them off at this stage. Take the peeled sausage and cut in half lengthwise and then into half moon shapes. Saute in a skillet with a few swirls of olive oil. Let the meat get brown and caramelized. Remove the meat from the pan and brown the onions in the meat drippings. Boil the potatoes in the chicken stock for about 20 min until the potatoes are tender. Blend 3 or 4 ladlefulls of stock and potatoes in a blender and return the mashed mix to the pot to thicken the soup. Add the meat, onions, corn, and carrots and simmer until the soup is heated through.
Posted by Mrsblocko at 9:57 AM