Fish in the crockpot? Mrblocko was very skeptical about that concept. He was certain that it would make the entire house reak of fish for a week or two. I thought otherwise and told him he could say "I told you so" as I sprayed Fabreeze over every surface from here to Timbuktu.

I also had a lot of confidence in this recipe because it came from the blog A Year of Slow Cooking. I've never had a recipe from there that I didn't absolutely love. Well...until now. 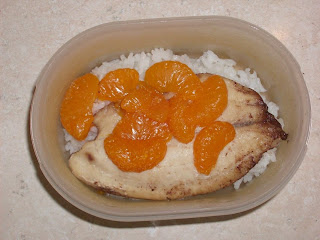 The dish looked OK. The little mandarin oranges look mighty cute sitting there don't they. Amazingly, it didn't make the house smell like fish. The house did smell like warm balsamic vinegar though, which, truth be told, is not any better than fish.


Blockette did not fail to comment on how stinky the kitchen was all throughout dinner. I finally had to tell her that I knew it didn't smell good and that if she kept bringing it up I was going to count her to a time out. After that I only had to count her to 2(3 gets you a time out)...sigh.

I was really hoping that the since the dish didn't smell fishy, it wouldn't taste fishy. Grilling fish on cedar planks has ruined me on fish that isn't covered in a mountain of cheese. (Cheese makes just about anything edible.) The fish tasted fishy, not citrusy like I expected. This is fine and dandy if you are a person who likes fish. Unfortunately, I am not that person.

After discovering the fishy taste, I ate enough of it to set a good example for Blockette. With all the complaining she did about the smell, she ate her dinner just fine. I sent the leftovers to work with Mrblocko the next day. It couldn't have been too horrible because he ate it all.

If you love fish and are looking for an easy way to make it, head on over to A Year of Slow Cooking to get the recipe for orange honey tilapia in the slow cooker.
4 tilapia filets (frozen is just fine)
2 tablespoons balsamic vinegar
1 tablespoon honey
1 (10-ounce) can mandarin oranges, drained
aluminum foil
salt and pepper to taste at the table

Use a 6-quart slow cooker. Lay a length of foil on your countertop and place the fish directly in the middle. Dribble balsamic vinegar and honey over the top of each fillet, and place a handful of drained mandarin oranges on top (my kids like to drink the juice!). Fold over foil and crimp the edges to form a packet. Put the foil packet into your slow cooker, and put the lid on (if you'd prefer to have one fish fillet per packet for serving, divide the sauce and the oranges). Cook on high for two hours, or until fish flakes easily with a fork. If your fish was frozen, it may take another 30 minutes or so, but you should still check it after two hours. Season to taste with some salt and pepper at the table.
Posted by Mrsblocko at 10:40 AM