Pumpkin pecan chocolate chunk cookies with maple brown butter frosting may have the longest name ever for a cookie, but they are so sinfully delicious. The saddest thing about them is that I almost didn't make them. You see, the frosting requires you to brown the butter. Yes, brown the butter, not burn it. I have avoided recipes that require browning butter for years in fear of ruining the butter. I thought it was high time I at least tried it.

You'd better believe I watched that butter like a hawk. I stirred it and stirred it and nothing happened. Then, all of a sudden the butter started to froth and foam. The whole thing almost boiled over. Then poof, like magic....brown-ness. Wheeew! I did it! I'm not ashamed to admit I did a little happy dance right there in front of the stove. At least it amused the munchkin.

I thought browning the butter would be the most challenging part of the recipe. It turns out that the dough was the real trouble maker. I think the butter I used in the cookies may have been a bit too warm. The recipe also called for self rising flour which I did not have. I read online that you can make your own by adding 1.5 tsp baking soda and 1/2 tsp salt per cup of flour. Perhaps one or both of these issues resulted in a batter that was on the liquid side. I'm positive this was the reason why my cookies were flat instead of cakey. At least they moist and chewy.

Before baking, I put the dough in the freezer for 30 minutes to firm up a bit. It did help, but not as much as I had hoped. The first sheet I made I used a large cookie scoop to portion out the cookies. Woah. I ended up with a giant mega under-cooked uni-cookie, instead of five individual cookies. I could not get the large cookies to firm up properly. I baked them for 20 minutes and they still looked quite raw.

The next sheet of cookies I used the small cookie scoop and that seemed to fare better. Although, they were still on the gooey side. I cooked the first 2 sheets on Silpat, so before throwing out the remaining dough, I thought I'd try baking some on parchment. That worked much better. The cookies held together enough to be removed from the baking sheets in one piece. 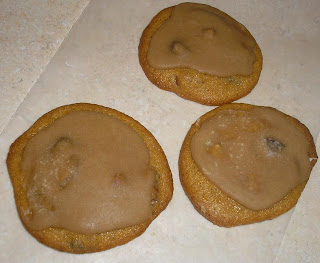 Once the cookies were cool enough to touch, I frosted them with the Maple Brown Butter Frosting. It should really be called Maple Brown Butter Crack Frosting. Because it is crack. Crack for people. The maple and browned butter flavors pair so wonderfully with the pumpkin and chocolate in the cookie. This frosting is so good I'll bet it would taste fantastic right off the spoon. Not that I would do that sort of thing...while anyone was watching.

I found that I had lots of extra frosting. This was most likely because I didn't frost the undercooked fellas. I didn't throw those gooey guys away. I had big plans for them. I stuck them in the fridge and the next morning we crumbled them over oatmeal with a drizzle of the left over frosting. Num! Momma, Papa and Little (cause Blockette is not a baby) Bear were quite pleased with our porridge.

As a side note: I didn't feel like going out and buying a whole container of pumpkin pie spice when I wasn't sure I'd use it again. I found a recipe for pumpkin pie spice on Baking Bites and made half a batch. I liked the taste and the aroma from the blend. I'll be making more pumpkin spice when my first batch is gone.)

Sift sugar and set aside. Melt butter over medium heat until golden brown. Watch closely so it does not burn. Add butter to sugar, scraping all the butter into the bowl. Add milk and maple flavoring. Stir until smooth. Spread on top of cookies with an knife or offset spatula.
Posted by Mrsblocko at 7:24 AM