Palmiers and the Bake Sale 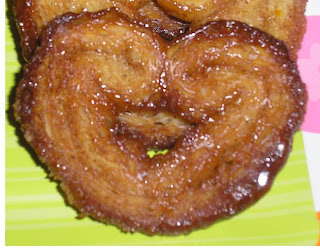 I'd never made Palmiers before. They are simple to assemble, but require serious babysitting once they are in the oven. The recipe said to bake for 15 minutes then to flip the cookies and continue cooking for another 7 minutes. I'm thinking more and more that my oven runs hot. I followed the recipe's bake times and wound up with burnt cookies! After much fussing, I found baking 10 minutes, then flipping and cooking for another 5 minutes, worked best for me. Even with that reduced cooking time, my Palmiers were much darker than the photo from blog I found this recipe on.

I only managed to burn myself once. The recipe even warns you about how easy it is to get burned by hot sugar. Duh. I'm just happy I only burnt myself once. I count that as a victory.

There was a lot of extra orange cinnamon sugar left over from coating the pastry. Did I toss it out? No way! It makes extra spiffy cinnamon toast.

Here is the link to the recipe for cinnamon orange palmiers. If you attempt them, let me know how they turned out for you. I'm interested to discover if you had to reduce the baking time as well.

As for the bake sale, the palmiers and cookie cups didn't sell! I think people didn't know what the palmiers were, and were afraid to experiment. The woman in charge of the bake sale was surprised no one bought the cups. I guess people were looking for something they could eat right then and there. At least the Giant cookies were a hit. Now I know for next time!

Center an oven rack and preheat the oven to 400F. Cover a large baking sheet with parchment or a silicone mat. Set aside. Combine the sugar, cinnamon, and zest together in a small bowl, stir well with a fork. Sprinkle some of the sugar mixture over a working surface, then roll one half of the puff pastry into a 10-inch square. Sprinkle more sugar evenly over the pastry and roll the rolling pin lightly over the surface to adhere the sugar. Fold in two opposite sides of the pastry square so the sides meet in the center. Sprinkle some sugar, and repeat the folding. Sprinkle more sugar again, then fold one half of the pastry over the other. Cover loosely with parchment and place in the freezer to firm up, for about 30 minutes. Bake the palmiers in batches until golden and caramelized on the bottom, about 15 minutes. Turn the cookies over (be careful, the caramel is extremely hot and dangerous!) and bake until golden on the other side, about 7 minutes more. Transfer the baked cookies on a rack and cool completely.
Posted by Mrsblocko at 8:21 AM