I saw this awesome looking 21ingredient slow cooker chili from A Year of Slow Cooking, and I just had to give it a try.

This chili is absolutely loaded with goodies.  I mean sweet potato?  In chili?  Mustard?  Soy sauce?  YES!  It sounds weird, but it all magically works. 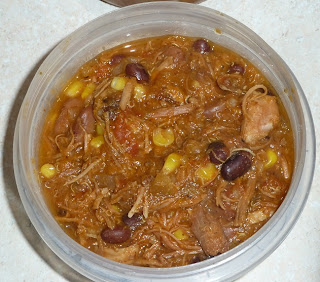 I made a few slight changes to the recipe based on what I had on hand.  Instead of 2 pounds of chicken thighs, I used 2 pounds of shredded turkey.   I had purchased an extra turkey in November when they were on sale, and this was the last of those leftovers.

Kidney beans aren't really my thing.  I think it's their tougher skin, so I used black beans instead.  I also had some peruano beans cooked up, so I used those in place of the cannelinis.

I mistakenly thought I had a can of corn in the pantry.  Well, I did, but it turned out to be creamed corn.  I thought that might be a tad odd in the chili, so I used about a cup and a half of frozen corn.  I added the frozen corn about an hour or so before we ate.

The recipe calls for chipotle chili powder.  I didn't have any of that, and thought adding it might make the chili too spicy for Blockette.  I found myself wishing that the chili had a bit more heat, so I think next time I will either go out and buy some chipotle chili powder, or use a finely chopped small chipotle in adobo.

Finally, I added a cup of cooked quinoa.  I had read a recipe somewhere that said they used quinoa in their chili.  I happened to have some cooked quinoa in the freezer, so I tossed it into the crock pot in a few frozen chunks.  This was a bit of an afterthought, so I probably added it a few hours into the cooking time.  This chili is so thick and hearty that I couldn't see or taste the quinoa at all.

This chili really feeds a crowd. I'll be making it again once we work our way through all the leftovers in the freezer!

Use a 6-quart or larger slow cooker. Put the chicken into the bottom of your cooker; frozen is okay, but cut it into chunks. Add the diced onion, canned beans, tomatoes, chiles, corn, and grated sweet potato. Now add the mustard, honey, and dried spices. Carefully stir well to distribute spices the best you can. Pour in the chicken broth.

Cover and cook on low for 8 to 10 hours, or until chicken easily shreds with two large forks. Although you could cook this on high in 4 hours, the flavors will meld best when cooked low and slow. Stir very well and serve in a large bowl with your favorite chili toppings.
Posted by Mrsblocko at 9:52 AM