First of all, let me say Happy Halloween! Mrblocko and Blockette are out panhandling for sweeties while I am at home playing on the computer waiting to pass out candy to all the kids that never show up. So far they've been gone for a half hour and I've only eaten one piece of candy. I deserve some sort of medal for that...or another piece of candy.

Anyhow, all week I told Blockette that we were having spiders for dinner on Saturday while it was just us girls. Heh, she was pretty worried for a while. Sometimes she can't tell when I'm pulling her leg. I like to keep her on her toes. It's only fair. She keeps me on mine!!!

So yesterday I asked her if she would help me prepare our spooky dinner. She was pleased to find out our spiders were really hot dogs and spaghetti. I got the idea for the spiders from The Family Kitchen. I think the coolest part about making them is when they are fully cooked, the spiders dance around in the pot. 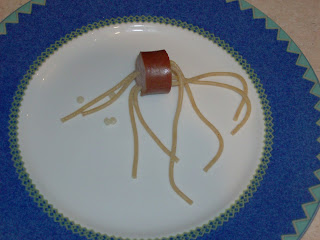 Spiders weren't the only thing we had for dinner. We also had spider eggs (acini de pepe noodles), worms (more spaghetti noodles), Ogre skin with rolly polly bugs and witches' finger nails (salad with craisins and sunflower seeds) and brains. Well, Blockette had brains. They were too disgusting for me.

The brains were actually Blockette's idea. She thought scrambled eggs would make good brains. Don't ask me how she came up with that. I don't have a clue. It was my brilliant idea to add purple food coloring to the eggs before I cooked them. If you've ever tried to make purple frosting you know that purple food coloring makes everything elephant gray. Bleck. They made for some realistic looking brains. The photo does not do them justice in all their gory glory. 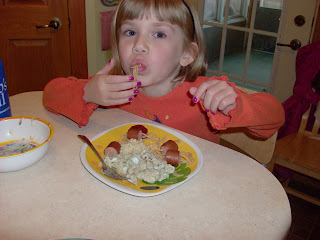 In case you were wondering how to eat a spider, the best way is to shove the whole thing in your mouth at once. Then you can feel them squirming around. Oh, and you gotta dip them in blood(ketchup) too. Or if you want to live dangerously, you can do like I did and consume them with dragon's blood (Sweet Baby Ray's Honey Chipotle BBQ Sauce.)

After all that gory stuff, you gotta cleanse your palette with something sweet...witch hats! I totally stole the idea from Little Nummies. I made ours with cinnamon sugar that had been infused with orange zest. 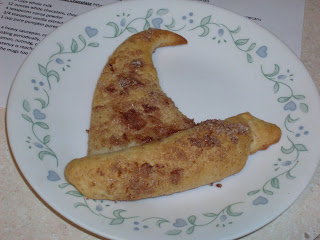 Who would have thought crescent rolls could make something so cute?

Our spooky dinner was a total hit, which means I'm going to have to find something even cooler for next year!

Posted by Mrsblocko at 4:52 PM