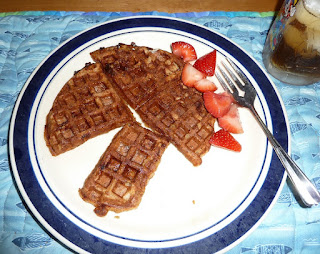 With the weather being so insanely hot for such an extended period of time, we've found that our bananas are ripening at an accelerated speed. I try to buy the greenest bananas they have at the store, but still they are black by the end of the week. So I peel them and freeze them and try to find a use for them.

There are two things I usually make with bananas: banana bread and banana pops. The popsicles would seem like the obvious choice with how hot it has been this summer. However, Blockette has not been into eating popsicles lately so all the popsicle molds are still full. And as for the banana bread, I just don't feel like turning on the oven if I don't have to.

So I went on a quest to find a way to use up my growing store of frozen over ripe bananas. I came across a few different recipes for Banana bread waffles, but settled on the one from Willow Bird Baking simply because it called for three bananas instead of two.

I made a few minor changes to the recipe (not listed below).  I had some vanilla Light n fit yogurt so I used that instead of the buttermilk.  As there was quite a bit of sugar in the yogurt already, I omitted the 2 T of sugar as well.  My batter was super thick, so instead of adding 1/4 c of milk, I added 1/2 c. The batter was still very very thick.  I also only used 1/2 c of chopped walnuts.  In place of the other 1/4 c walnuts, I swapped in 1/4c chopped cinnamon baking chips.

I don't know if it was the cinnamon chips, but the waffles really wanted to stick to the iron.  I found that if I sprayed the top and bottom plates of the iron after every other waffle, that eliminated the problem.

We ate our waffles with homemade syrup and strawberries.  I'm not normally one for fruit on my waffles, but this was a really great flavor combination.

Combine the flour, salt, sugar, baking soda, and cinnamon. Mix together the buttermilk (or buttermilk substitute) and the egg yolks. Stir in the butter, mashed banana, and vanilla.

Spray the waffle iron lightly with oil and preheat it. Stir the wet into the dry ingredients. Beat the egg whites in a separate bowl with a whisk or electric mixer (make sure bowl and mixer are spotlessly clean) until they hold soft peaks. Stir them gently into the batter. Stir gently to combine.

Spread a ladleful or so of batter onto the waffle iron and bake until the waffle is done, usually 3 to 5 minutes, depending on your iron.

* The buttermilk can be substituted with 1 1/4 cups of milk at room temperature, mixed with two tablespoons white vinegar, left to clabber for 10 minutes.
Posted by Mrsblocko at 5:26 AM