My mom makes the best French Toast. She uses regular bread and loads of cinnamon and boogers. No, not really boogers. She does something secret though because no matter how hard Mrblocko and I try, we simply cannot make French Toast that tastes nearly as good as hers.

I still think my mom makes the best French Toast, but this version of French toast smores from Buns in My Oven is scrumptious over the top alternative. 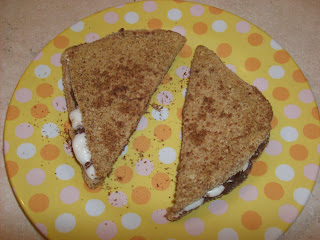 When I say over the top, this is no exaggeration! Slather Nutella and marshmellows between two slices of bread. Then dip the sandwich into eggs and then crushed graham cracker crumbs. I used the Cinnamon variety. What is there not to love?

It tastes just like it sounds...a smore in a French Toast Blanket. You just can't escape deliciousness with that combination.

I don't think I can justify having this for dinner, or breakfast or any other meal. I might just go into sugar overload. While I most definitely could have eaten the whole thing, it was very rich. Instead of pigging out, I was nice and shared it with Mrblocko for dessert one night while Blockette was at church for youth group. Half of the sandwich was enough to meet the demands of my sweet tooth.

Heat a skillet over medium heat. Beat the egg and milk together in a pie plate or shallow dish. Pour the graham cracker crumbs in a second pie plate or shallow dish. Spread Nutella on both slices of bread. Top one slice with mini marshmallows and then put the other slice of bread on top, Nutella side down. Squish it together a bit. Place the sandwich in the egg mixture and turn to coat. Remove from the egg mixture and place in the graham cracker crumbs, turning the sandwich to coat each side with crumbs.
Place the sandwich on the skillet and cook until lightly browned and the marshmallows are melted. Let sit for a few minutes before cutting in half.
Posted by Mrsblocko at 6:03 AM