Have any of you been watching Survivor? Hello? Anyone? Well someone has to be watching it besides me because they keep bringing it back season after season. This time around they had someone on that has been on the show before and he was totally running the tribe. Hmm, maybe brainwashed is a better word than "ran" now that I think about it. The season finale was on last night and of course he won the million dollar prize.

Most of the time, the contestants on Survivor, well, survive on a few spoonfulls of rice a day. This season it was revealed that the crispy bits at the bottom of the pan were a highly prized treat. So much so that the one guy from a previous season (Boston Rob) had everyone on his tribe convinced that he would only eat the crispy rice. His fellow tribe members, with the exception of one (Crazy Phillip) gladly obliged him.

I remember watching this insanity and wondering what the big deal was. Well I accidentally found out what "crispy rice" was like. If you would like to replicate this Survivor delicacy, all you need to do is forget you have rice on the stove! Yes it is just that simple! And then, once you notice a weird, almost nutty aroma, give a yelp and immediately take the rice off the burner. Viola, your rice will be brown and crispy all along the pot's edges.

The crispy rice tasted fine, just a bit chewier than regular rice. I can see how it was a prized treat out there in the jungle. Having a different texture, and something you had to actually chew was probably a very nice change of pace from mushy old rice. 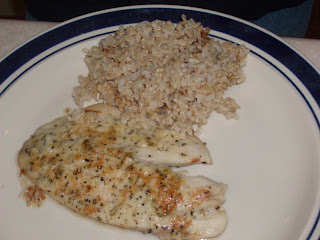 Now unless you are into malnutrition, you should probably eat something with your crispy rice. We ate ours with easy baked tilapia from How Sweet Eats. I loved how the Parmesan cheese on the fish got all brown and toasty in the oven.

I guess there are people out there in the world who thing that the combination of fish and cheese is an abomination. Well, I'm here to tell those people "plbbbt!" Cause this fish is really tasty! Cheese just makes everything better, even yucky fish. This fish was so good that there were absolutely no leftovers, something that very rarely happens in this house.

Preheat oven to 400 degrees.Pat tilapia dry (if frozen, it should be thawed first) with a paper towel and season with salt and pepper. Lay on a baking sheet sprayed with non-stick spray and bake for 10-12 minutes. While fish is baking, mix butter with garlic, thyme and parmesan cheese.

Remove fish from oven and gently flip. Spread about 1/2 tablespoons of butter mixture on the fish, and heat the broiler in your oven. Set fish under the broiler for about 2-3 minutes, or until cheese gets golden and bubbly. Serve with lemon.
Posted by Mrsblocko at 6:53 AM