I made these Lemon Frosted Rasberry Brownies from The cooking Photographer for a crafty day with some friends. It had never occurred to me to put lemon frosting on top of brownies. I thought the idea was intriguing, but was unsure if it would be a good flavor pairing. And if my friends didn't like the lemon frosting? Hey, they could just scrape it off.

Lucky me the lemon and chocolate went really well together. The frosting was from a can, but adding lemon zest masks any "canned" flavor. At least I thought it did. 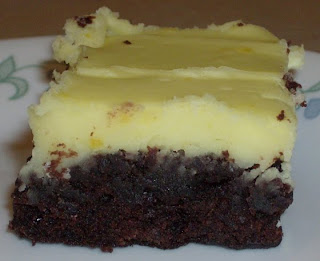 The brownies have a raspberry fruit spread mixed into the batter. This was a pretty big let down. The raspberry flavor was nearly undetectable. I had a few leftovers from the get together, and after the brownies were a day old, the raspberries were only slightly more pronounced. The preserves did make the brownies really moist though. That was a nice added benefit. I think if I make these again, I will prepare the brownies at least a day in advance so that raspberry flavor gets more of an opportunity to shine through.

Preheat the oven to 325F. Line an 8x8 inch baking pan with foil and grease the foil. In a large bowl, whisk together spreadable fruit, water, oil, and egg. Add the brownie mix and stir until just combined. Pour batter into the pan and bake for 45 to 50 minutes until done. Cool brownies completely in the pan on a wire rack. Mix lemon frosting and lemon zest together. Spread over cool brownies. Freeze brownies for 1 hour for easier cutting. Cut into strips and strips into rectangles. Garnish individual brownies with berries if desired.
Posted by Mrsblocko at 7:24 AM