I am so far behind on writing up things for this blog. I made these tortilla strips as a topping for Nacho Soup I made for a Relay for Life gathering back in February. I knew the soup needed tortilla chips as a topping but I thought that full size chips would be messy and unwieldly. 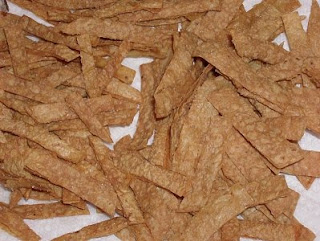 I used the recipe for baked tortilla chips from Tracey's Culinary Adventures. I just cut them into little strips instead of triangle wedges. I baked these at 375 F for 8 minutes on each side.

The directions didn't say, but I found that the chips stayed soggy if I brushed on too much oil. So if you are going to make these tasty chips, go easy on the oil. Also, do not forget to salt them before you bake them. If you wait to salt them after they get out of the oven, like you would if you fried them, there won't be anything for the salt to stick to.

Last of all I would like to mention that my package of 12 corn tortillas actually had 13! So neener neener I got a bonus tortilla! Woot woot!

Preheat oven to 350 F. Brush both sides of the tortillas with the oil. Stack the tortillas and cut the pile into sixths (I cut mine into eighths) to make chips. Spread the chips out in a single layer on two large baking sheets and season with salt. Bake until golden brown and crisp, rotating the baking sheets once, about 12 to 15 minutes.
Posted by Mrsblocko at 7:15 AM