When I saw the petticoat skirt tutorial over at Alisa Burke, I thought it was just the cutest little skirt ever. I don't think I'd have the guts to wear something like that in public, but I knew Blockette would, especially if I made a pink version.  My intention was to give it to her for her birthday.  Alas, that was not to be. 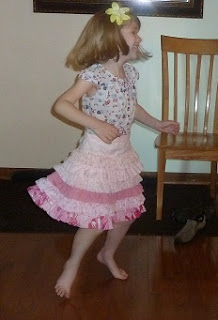 Oh sure, it looks all beautimous and twirly, and oh so very girly.  Except, since I was making this skirt as a surprise, I just traced one of her existing skirts to get the pattern, instead of measuring the kiddo.  What I didn't realize until I had attached all those ruffles, was that I didn't take into account that the skirt I traced had elastic in the back.  I had made the skirt too narrow for wee missy's hips.  Doh! At least I realized my mistake before I gifted it.

Lucky for me, I cut those ruffle strips with pinking sheers.  I wanted them to have a raw looking edge, but I wanted to keep the fraying under control.  So I just cut down the back of the dress with the pinking sheers.  (You cannot believe how much I cringed when I did this.) Then, I attached some super wide lace at each side of the waistband, so now the ruffle skirt is a ruffle apron.

Yikes!  Look at that huge gap.  What was I thinking? 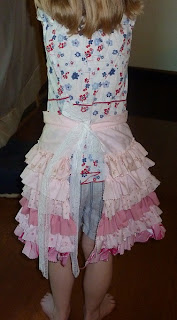 I'm not sure if Blockette will use the skirt for anything other than dress dress up. At least Blockette likes this type of apron skirt for playtime.  She'll probably get more use out of an apron anyhow.  If I had sewn the skirt the right size, once her hips and waist grew,  the skirt would no longer fit, but as an apron I'm only limited by the ability to tie the straps.
Posted by Mrsblocko at 12:57 PM