These burgers were delish. I thought they tasted just like a big burrito on a bun. I liked that they were so inexpensive to make too. Ground turkey is a $1 a pound on sale near me, and the meat gets stretched out further by adding rice and beans. 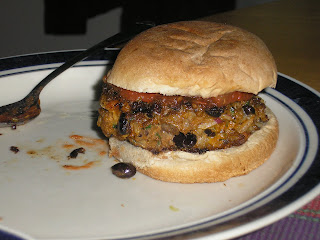 Blockette and Mrblocko didn't like this nearly as much as I did. That's ok. More for me! At one point Blockette started to pick the beans out of her burger, but once she realized she would have to eat the beans plain if she did that, the picking stopped. Surprisingly, she ate the rest of the burger without complaints. Ok. So it was not so surprisingly since we told her if she kept complaining about the beans she wouldn't get any ice cream for dessert.

We ate these burgers with salsa and sour cream on top. If I had guacamole or an avocado it would have been even tastier. The original recipe does in fact call for an avocado as a topping ingredient, but I forgot to pick one up at the store.

I made quite a few changes to the recipe so I'm going to post all my changes below. Here is a link to the original recipe for Black Bean Turkey Burrito Burgers from the Rachael Ray Show. One word of warning, don't put these guys on the grill. They will make a huge mess. They are meant to be cooked on a pan. Besides, if you cook them on the grill, the cheese in the patties will melt out. If the burgers are cooked on a pan, the cheese will get nice and crusty. Trust me, you want that. Your taste buds will thank you.

In a bowl, combine the ground turkey, cooked rice, beans, cheese, cilantro, red onion, chili powder, grill seasoning, cumin and hot sauce. I made my burgers into 7 regular sized patties, and 2 Kid size patties. Preheat a large, nonstick skillet over medium-high heat with 2 turns of the pan of EVOO, about 2 tablespoons. Cook patties 6-7 minutes on each side, until cooked through. Serve with salsa, sour cream, tomatoes and avocados.

Posted by Mrsblocko at 8:17 AM